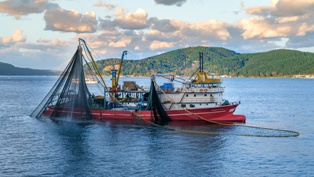 Commercial fishing has a fatality rate 29 times higher than the national average, making out one of the most hazardous occupations for U.S. workers around the globe. In an effort to protect the lives of these workers, the National Institute for Occupational Safety and Health (NIOSH) has dedicated several studies to identifying hazards on commercial fishing vessels and developing interventions to reduce fishing injuries and fatalities.

Even with the natural hazards present on a vessel traveling in open water, there are many things shipowners can do to reduce the risk of injury. Vessel owners and operators have a duty to provide as safe an environment as possible, starting with identifying the biggest risks to life and limb while working aboard a ship.

Research conducted by NIOSH’s Western States Division (WSD) office in Alaska has shown that the greatest dangers to fishermen are:

Vessel disasters are the leading cause of death for commercial fishermen, accounting for 50% of fatalities nationwide between 2000-2014. While engineering controls such as flood sensors and hatch and door monitoring systems may prevent a vessel disaster from occurring, there are still many ways to increase safety and survival rates even when a vessel is lost.

How to prevent injuries: NIOSH recently conducted an assessment of the effectiveness of life rafts and immersion suits required by Coast Guard regulations. The results were staggering: crew members whose fishing vessels had sunk were 17 times more likely to survive if they boarded a life raft, and 12 times more likely to survive after they had been in the water for 30 minutes. Crew members wearing immersion suits had survival rates six times higher than those who were not. NIOSH strongly recommends compliance with Coast Guard regulations regarding emergency safety equipment, as well as mandatory marine safety training courses covering the protocol for an emergency at sea and skills for surviving a vessel disaster.

The second most common cause of death for commercial fishermen is overboard incidents. Of the 210 fatal man overboard incidents recorded by NIOSH between 2000 and 2014, not a single victim was wearing a personal flotation device (PFD)—and only about half of these incidents were actually witnessed by another crew member.

How to prevent injuries: The majority of overboard victims suffer death by drowning through cold incapacitation. For this reason, wearing a personal flotation device is the most effective way to reduce overboard deaths, as a PFD prolongs the victim’s ability to float while waiting for rescue. Fishermen should avoid working alone on deck whenever possible, and to utilize man overboard alarms to alert the crew when a fall occurs. Monthly rescue and recovery training (including live drills) also increase the odds of survival.

While on-deck injuries account for just 12% of commercial fishing fatalities, they are the largest cause of non-fatal fishing injuries that require hospitalization. The presence of heavy machinery (such as haulers and winches) and the various high tension lines and cables running through it are a leading cause of contact and entanglement injuries, including amputations.

How to prevent injuries: NIOSH takes a combination strategy to prevent on-deck injuries through hazard awareness and engineering controls. The most effective prevention methods include the installation of emergency stop (e-stop) devices on hydraulic deck machinery, improved static guards on deck winches, and ensuring that all crew members attend mandatory marine safety training courses at least every five years.

Let Us Advise You on Your Commercial Fishing Injury

If you or a loved one has been hurt on a commercial fishing boat, our maritime injury attorneys can determine who may be liable for your accident and what you are owed under the law. Call (800) 362-9329 today to set up your initial consultation or download your complimentary copy of Are You a Seaman Injured in a Maritime Accident? Know Your Rights today.