With over 30 years experience in tort litigation, Paul T. Hofmann, partner with the law firm of Hofmann & Schweitzer, stands tall as a champion for victims whose lives are forever changed. He has resolved hundreds of personal injury and wrongful death suits, through settlements and scores of jury verdicts. He has gotten over a hundred million dollars in recoveries for his clients which places him in an elite group of multi-million dollar advocates. 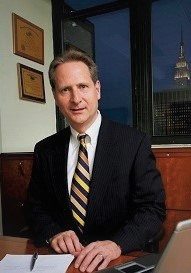 Perseverance and determination are the firm's guiding principles. As managing partner, Paul insists that the assigned attorney personally visit the client's accident site to develop an understanding of why the event happened. Further, attorneys are required to return any client's call within 24 hours. Existing clients and potential clients are often surprised to get phone calls and email replies from Paul after working hours and on weekends. Personal service sets Paul and the firm apart from many other plaintiffs firms. Each client is entitled to be treated as if his/her claim is the only one that matters. "Our mission is to maximize each client's recovery by thorough research, preparation and creative presentation."

Paul's passion for representing working men and women is not only recognized by his clients but also by his peers who voted and selected him for inclusion as a New York Super Lawyer since 2006 to the present.

Paul T. Hofmann has been counsel representing the party making new, and important additions to the body of maritime, construction and railroad law. The extent of his experience and knowledge is exemplified in the myriad of cases he has handled which have resulted in reported decisions. Below is a non-exclusive list of many of the major cases he has handled which resulted in reported decisions.  These decisions show the nature of the diversity of maritime law, construction law and personal injury litigation topics with which he has developed expertise.