The Danger of Jet Skis 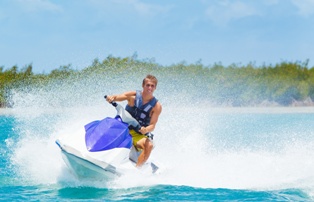 Jet skiing can be a fun and exciting way to enjoy time outdoors during the summer. Jet skis are easier to use and less expensive than other recreational boats. However, what starts as an enjoyable day on the water can end in tragedy.

Nationally, personal watercrafts such as jet skis are the second most common type of vessel involved in recreational boat accidents. The United States Coast Guard’s 2017 Recreational Boating Statistics indicate that:

In New York, six people died and 41 people were hurt in personal watercraft accidents during 2018.

Common reasons for these types of recreational boat accidents in New York include:

Additionally, stricter requirements are in place for people who rent jet skis in New York. Jet ski renters must be at least 16 years old.

Despite New York’s laws to prevent jet ski accidents, each year people are hurt and killed in jet ski accidents. Jet skis offer very little protection in a crash. When a collision, an ejection, or another type of accident occurs a jet skier may die or suffer a serious injury such as a:

Protect Your Legal Rights After a Jet Ski Accident

Your jet ski accident may not be your fault. An experienced maritime injury lawyer will investigate all aspects of your case to determine who caused the accident and who should pay for your injuries or your loved one’s death.

You shouldn’t have to pay for an accident that someone else caused. Our maritime lawyers represent clients throughout the world, including in all parts of New York. Call Hofmann & Schweitzer today to schedule your free consultation about your potential jet ski accident case.