Injured Navy Personnel and Families of the Deceased Crew from the USS John S. McCain Collision with Alnic MC Have A Limited Time To Assert Claims against Alnic for Its Fault In Causing the Event—the Deadline for Filing Claims is June 15, 2018

If you or someone in your family was injured in the collision between the USS John S. McCain and M/V Alnic, you should contact the maritime attorneys at Hofmann & Schweitzer right away. The corporate owners of the Alnic have taken action to limit liability for the accident—depriving the men, women, and families who suffered injury and losses their rightful compensation. Contact us through our online form or call 212-465-8840 or 800-362-9329 to file your claim before the deadline passes.

On August 21, 2017, the U.S. Navy destroyer USS John S. McCain collided with the oil tanker M/V Alnic as it was approaching the Singapore Strait. While it is unclear who was primarily 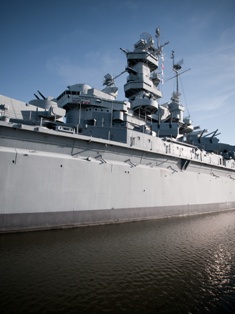 at fault for the crash in the major shipping lane, deaths and injuries only occurred aboard the destroyer. The force from the 600-foot tanker breached the McCain’s hull, killing 10 sailors and injuring several more when compartments below the water line were flooded.

Although the exact cause of the accident is still under investigation by the United States Coast Guard and the National Transportation Safety Board, the owners of M/V Alnic have already taken action to prevent U.S. service members from filing injury and wrongful death lawsuits related to the crash. In February, Energetic Tank, Inc. filed a limitation proceeding in New York, reducing the value of the claims and excluding anyone who does not file a notice of claim before the deadline from ever being able to file a lawsuit.

Seamen Injured in the McCain Collision Must File Claims Before June 15, 2018

Under the Limitation of Liability Act, the owner of a vessel can file a proactive lawsuit against anyone who may have a claim for a marine disaster. This organizes the claims from the accident into one lawsuit, but also places a cap on the overall amount of damages available to those who are able to file claims. It also limits the number of claimants by setting a deadline by which all claims must be filed to be eligible for compensation.

In its filing with the United States District Court in Manhattan, the owner of the tanker wants the court to declare that it has no liability for the damage to the Navy ship or the injuries sustained in the accident. The filing of a preemptive lawsuit against the U.S. Navy, the injured naval personnel, and the families of the deceased allows the owner to set a deadline for responding to the action. All casualty-related claims must be brought on or before June 15, 2018.

By giving injured seamen and families of the deceased service members only a few weeks to file their claims, the owner of the Alnic could drastically limit the number of people who receive compensation for the disaster.

View the Notice of Complaint, Verified Complaint, Interim Stipulation, Letter sent by the Navy to the McCain crew, Order extending the Notice of Claim to June 15, 2018, and the Government report on the collision.

Our office has made it a priority to fight for injured Navy personnel and the families of the deceased crew members of the USS John S McCain. Our law firm has been serving maritime injury victims throughout New York, New Jersey, and nationwide for over 40 years. Located in midtown Manhattan and concentrated on maritime law, we are uniquely qualified to assist those affected by the McCain collision.

We can help you recover the compensation you are owed for:

We are honored to protect the legal rights of the hardworking servicemen and women who protect our country. If you were hurt or a family member was killed aboard the USS John S McCain, is vital that you contact our office as soon as possible. Fill out our quick online contact form or call 212-465-8840 or 800-362-9329 to speak with a maritime injury lawyer at Hofmann & Schweitzer today!