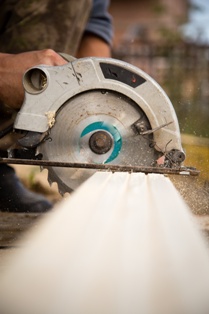 One in every ten construction workers will suffer an injury that results in long-term or permanent disability. Work sites that involve cutting operations are particularly dangerous, as employees are at increased risk of lacerations, eye injuries, amputations, broken bones, and even fatal construction injuries as a result of a saw accident.

Saws and cutting tools cause tens of thousands of injuries every year in the United States. Table saws alone are responsible for nearly 30,000 emergency room visits annually. Workers have suffered deep cuts and gouges, lost fingers and hands, and experienced severe blood loss and scarring due to construction saw accidents—many of which could have been prevented if proper safeguards had been in place.

The most common types of saws that cause construction site injuries include:

Who Should Be Held Responsible for a Construction Saw Injury?

Since most injuries caused by saw accidents are severe, many employees will incur costs that are not fully covered by workers’ compensation. While workers in these situations may not sue their employers, they may be eligible to file a third-party lawsuit against a party who caused the injury.

People and entities that may be liable for a construction saw accident include:

If you have been hurt in a saw accident, the experienced New York construction injury lawyers of Hofmann & Schweitzer can help you hold the negligent party responsible for your lost income, medical care, permanent disability, and pain and suffering. Simply contact us online or call us directly at 212.465.8840 to schedule your free initial consultation.