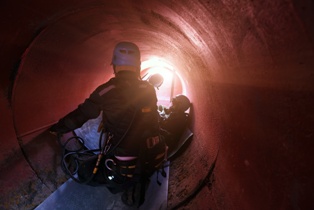 Confined spaces are a significant threat to the lives and safety of New York City construction workers. In addition to suffering injuries while crawling into and out of tight spaces, workers risk suffocation, cave-ins, and other deadly accidents each time they enter a confined space.

What Is a Confined Work Space?

A confined space may be big enough for an employee to fit in, but is not designed for continuous occupancy and has a limited means of entry or exit. Some spaces may be large enough for several workers, while others may be barely big enough for one person to fit inside. On a construction site, an employee may enter a confined space in order to install fittings, perform inspections or air quality testing, or nearly any other daily work activity.

Workers may be injured inside all types of confined spaces, including:

Confined spaces are not just hazardous because they are difficult to escape in an emergency, they can also injure workers who remain inside them for an extended period of time. To make matters worse, employees are often killed as they attempt to rescue a co-worker who has lost consciousness or become trapped in a confined space, doubling the number of fatalities in an accident.

The most common reasons employees are injured in confined work areas include:

Who Can Be Held Responsible for a Confined Space Work Injury?

Most confined space accidents are completely preventable, and the person responsible for the deadly factors that lead to an injury can face charges of negligence. If a worker’s injuries were due to an unsafe work environment, contractors, construction managers, and property owners may be held accountable. However, if the accident was a result of faulty equipment, the manufacturer of the defective product could be liable for the worker’s lost income, medical bills, and pain and suffering.

If you or someone you love was injured while working on a New York City construction site, you may be able to file an injury lawsuit in addition to collecting workers’ compensation. Our construction accident attorneys can examine the facts of your case, perform a thorough investigation, and work to get you the compensation you deserve. Fill out our quick online contact form or call (800) 362-9329 to speak with an injury lawyer at Hofmann & Schweitzer today.