Our maritime injury law firm is dedicated to helping clients nationwide get the assistance and compensation they deserve after a disaster at sea. For that reason, we are asking any crew members who were aboard the USS Fitzgerald during the collision with the ACX Crystal to come forward for a free case evaluation. The 3-year deadline to file a claim is quickly approaching, so please call 1-800-3-MAY-DAY or complete our online contact form today.

Lawsuits Arise After the ACX Crystal Collision With the USS Fitzgerald

In the early hours of June 17, 2017, the USS Fitzgerald was underway roughly 50 nautical miles southwest of its home port in Yokosuka when it was hit by an oncoming container ship. The ACX Crystal was allegedly on autopilot in the busy shipping lane off the coast of Japan, giving the USS Fitzgerald’s crew less than a minute of warning before striking the 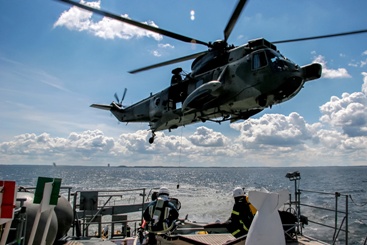 starboard side of the U.S. Navy destroyer.

The impact tore a 13-foot by 17-foot hole in the USS Fitzgerald, breaching a machine room and damaging portions of the second and third decks below the main deck. The collision caused damage above and below the waterline, allowing water to rush into the berths where the majority of crew members were sleeping. According to the complaint, sailors were thrown from their beds into a wall of water rushing toward them, all with limited visibility as the collision had knocked out the lights. Twenty-seven sailors escaped, but seven were killed by drowning.

The collision also directly struck the quarters of the commanding officer, who was found hanging from the side of the ship. Unable to reach him due to debris blocking the door, sailors were able to rescue the CO by tying themselves together with a belt and using it as a harness. Several injured crew members, including the CO, were evacuated off the ship via helicopter as the remaining crew attempted to steer the ship to shore. In the months since the incident, 36 shipmates have received the Navy and Marine Corps Commendation Medal for their efforts on the day of the collision.

Plaintiffs Claim Negligence Caused the Injuries and Loss of Life

Several crew members and surviving relatives have come forward demanding justice for the collision. Plaintiffs are seeking over $287 million in damages from Nippon Yusen Kabushiki Kaisha, commonly known as NYK Line, a Japanese company that chartered the Philippine-flagged container ship.

According to court documents, NYK Line is allegedly responsible for the reckless and negligent conduct of the ACX Crystal’s crew that caused sailors aboard the USS Fitzgerald to suffer a range of injuries, including:

Let Our Experienced Maritime Attorneys Advise You on Your Case

Our law firm has been serving maritime injury victims for over 40 years, and we know what it takes to get adequate compensation that will last for the rest of our clients’ lives. We are currently serving as counsel to 27 victims of the USS McCain collision, which occurred shortly after the incident involving the USS Fitzgerald. The two incidents bear many similarities, including a collision between a U.S. Navy destroyer and a foreign commercial vessel, liability of a foreign vessel’s owners and operators, and the tragic loss of life of U.S. service members.

We are uniquely qualified to assist victims of this tragedy recover the compensation they are owed for:

We are honored to protect the legal rights of the hardworking servicemen and women who protect our country. If you were hurt aboard the USS Fitzgerald, is vital that you contact our office as soon as possible so that we can file your claim before the statute of limitations expires. Fill out our quick online contact form or call 1-800-3-MAY-DAY to speak with a maritime injury lawyer at Hofmann & Schweitzer today!